The Land and the Roads

Darnestown emanates from the junction of two roads: the Road from Seneca Mill and the Road from Georgetown to the Mouth of Monocacy. Both were used by indigenous people before colonists arrived.

Seneca was colonized in the late 1600s and a mill was said to be operating before 1700. The currently designated Seneca Historic District has many treasures and extends into Darnestown. It runs along Seneca Creek from the Potomac and extends west to Partnership Road and almost as far north as MD-107. 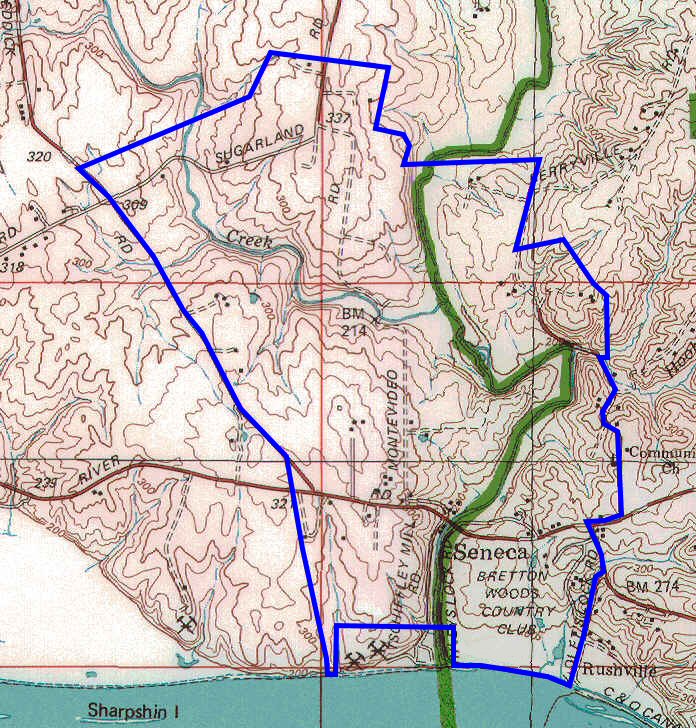 Geologically the transition from the Peidmont Plateau to the Atlantic Coastal Plain gave rise to Great Falls and made the Potomac River non-navigable. The sprawling Chesapeake Bay made for easy access for seagoing ships into the lower portions of the Potomac but just north of what is now Georgetown the river becomes increasingly impassable as it nears the fall line and Great Falls. An overland route was needed for travel and transit of goods.

In 1712 a map was made by a Swiss Baron named Graffenried who was in search of a place to make a colony for Palatinate people. The map featured a road from what is now Georgetown at Rock Creek to the Mouth of Monocacy on the Potomac. The road would later become known as the Road from Georgetown to the Mouth of the Monocacy. The overland route was a straight-line between the two trading hubs. 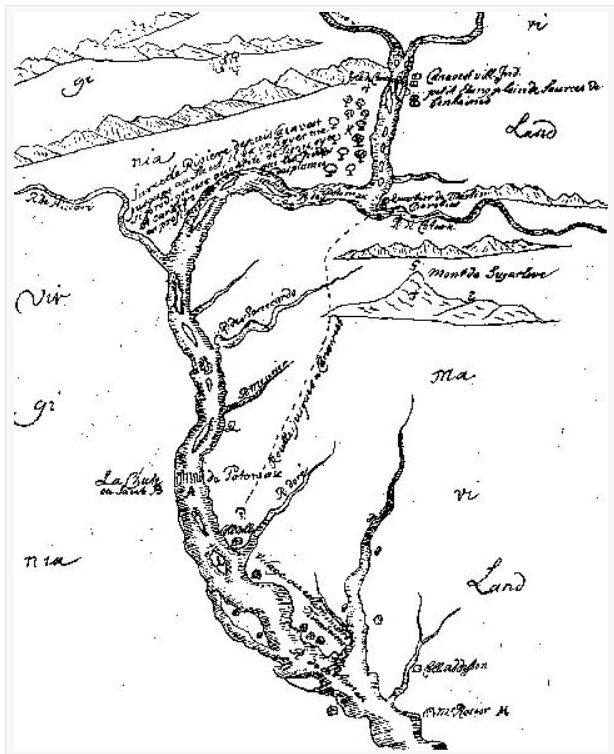 Later in the 1700s it would appear a third road emanated from Darnestown and extended to the area now known as Rockville. It is unclear, but seems unlikely the original Road from Georgetown to the Mouth of the Monocacy went through Rockville. The Rockville area land began to be patented in the early 1700s and by the mid-1700s permanent structures appeared. In the later part of the 1700s the area grew rapidly after being named the county seat of newly created Montgomery County. The Rockville area was then mostly known as Montgomery Court House until its formal naming as Rockville in county land records on July 16, 1803.

The 1794 Griffith map of Maryland clearly shows the current distinctive Darnestown Road MD-28 shape as it was formed by the road to Montgomery Court House (labelled Montgomery C.H.) and the western portion of the road from Georgetown to the Mouth of Monocacy.

In 1695, the land that now encompasses Montgomery, Prince George’s and Frederick counties, as well as Washington, D.C., was designated as Prince George’s County. The area was divided in 1748 and the western portion – including the land that would ultimately be Montgomery – became Frederick County. On August 31, 1776, Dr. Thomas Sprigg Wootton, a member of the Maryland Constitutional Convention, introduced a bill to divide Frederick into three counties – Frederick, Montgomery and Washington. The bill passed on September 6, 1776. These were the first counties in America to be established by elected representatives. The names selected for the new counties also broke with tradition. Earlier counties had all been named for old world figures such as Prince George and Queen Anne, but these were named after two popular Americans of the time – George Washington and Richard Montgomery.

Richard Montgomery was born on December 2, 1738 in Raphoe, Ireland. At 18 he was commissioned as an officer in the British army and fought in the French and Indian Wars, before emigrating to America in 1772. He was commissioned a brigadier general in the fledgling colonial army and he commanded an expeditionary force sent to Canada that captured Montreal. On December 4, 1775 his forces laid siege to Quebec. Although his troops were greatly outnumbered, he led several daring attacks on the fortress. On December 31, he was killed by cannon fire.

Georgetown was part of Maryland until the transition to the new national capital began in 1790.

In 1749 Ninian Beall1 (pronounced “bell”) patented land called Barren Hill just north of Seneca Creek and west of MD-118 between what is now Germantown and Darnestown. Beall also amassed extensive land holdings all around the junction totaling over two thousand acres much of which went to his children and their spouses. Beall’s wife was named Mary and they had eight children.

Two of the Beall’s daughters settled what is now Darnestown. Ruth Beall married Charles Gassaway (d 1816). The Gassaways were a prominent family in Anne Arundel County. Charles acquired extensive land around Darnestown and served as a Captain in the Militia and as coroner for the county.

The Gassaway’s built and settled in a house and land that came to be known as Pleasant Hills. The house was built on land originally patented as Mount Pleasant and contained the junction. The Gassaways had six children. One of their daughters was Elizabeth Gassaway.

The Gassaway family sold the property in 1829. Pleasant Hills still stands today on Kelley Farm Drive and the current owners operate a small farm (www.pleasanthillsfarm.com). Kelley Farm Drive is named after the family who purchased the homestead in 1868 and operated it for generations. During the 1970s most of the land surrounding the core twenty acres was sold off to developers.

Ruth’s sister Eleanor Beall married Zachariah Offutt. Zachariah obtained extensive land holdings including his homestead, part of which became the Nathan Allnutt Farm and then the Darby/Kramm Farm at 15800 Darnestown Road across from Black Rock Road and Bellingham Drive. The Offut’s had eight children.

Third generation Zachariah Offutt came to what is now the Darnestown area about 1772. He married a local girl, Eleanor Beall, daughter of Ninian Beall, and settled nearby. He accumulated considerable property. About 1802 or 1803, he built a large brick house on his “Petersburgh” tract for one of his sons, Andrew. This is now part of the present-day Windridge Farm, the home of Barbara and the late Thompson Butz.

In 1798 William Darne established himself near the junction by marrying Elizabeth Gassaway; daughter of Ruth and Charles Gassaway and maternal granddaughter of Mary and Ninian Beall. The Gassaway’s lived on and owned the land containing the junction. Elizabeth and William lived on the Gassaway land near or at the junction. Soon afterward the junction took on Darne’s name. The Darne’s had five children. William was a county representative to the state legislature, on the board of the C&O Canal Company, and a Justice. On his marriage certificate, in the census, and in legal documents William sometimes listed his last name as Darnes.

John Candler also established himself in the area. John Candler (b 1779 d 1833) married Adelaide Sarah Hays (b 1785 d 1854) of Barnesville in 1804. They had ten children. John was a Postmaster, tavern owner, and merchant in Darnestown.

The 1800 Census shows the Darne, Candler, Gassaway, and Offutt households all in the vicinity.

In 1803 a post office named Darnes was established and John Candler was the Postmaster. By 1823 the name of the post office was changed to Darnestown.

[1] Ninian Beall was a popular name back then. A famous Ninian Beall was a 6’ 7” tall Scotsman born in 1625 who patented 695 acres in what is now Georgetown and named it “Rock of Dunbarton” (Dumbarton). He was an indentured servant and after being released he gained prominence. He died in 1717 at age 92. He and his wife had twelve children and are said to have many tens of thousands of descendants. The Ninian Beal in Darnestown’s story died in 1790 and was of not directly related.

The Darnestown area, which was located at the intersection of Darnestown and Seneca Roads, was settled in the 1750s. Darnestown Road (or Route 28) was an old Indian trail and is recognized as one of the oldest roads in Montgomery County, Maryland. William Darne of Virginia, married Elizabeth Gassaway, the daughter of a wealthy landowner. They settled at the intersection of Darnestown and Seneca Roads and established an Inn and a tavern. The Darne family owned a large amount of land, was wealthy and very respected. In 1812, the area was named Darnestown in their honor. By the 1820’s, the town began to blossom and hosted a wheelwright, the Grist Mill, a blacksmith, a physician, a post office and a variety of other businesses. The stagecoach passed through the area from Georgetown to the river.

In 1855, the Darnestown Presbyterian Church, which is located at the corner of Turkey Foot and Darnestown Roads, was founded by the generous donation of three acres of land by John Dufief. The church was constructed of stone which was hauled from the local quarry by the men of the congregation. The completed church was dedicated on May 22, 1858. The church was renovated in 1897 and then again in 1953. The stained glass windows are memorials to the Tschiffely, Gassaway and Nourse families-some of the original members of the church.

In 1861, the Federal leadership realized that Darnestown was the natural place from which Washington, D.C. could be defended. There were 18,000 Union troops placed in Darnestown because of its ideal location. During the 1870s through 1900, Darnestown was a thriving business hub due to its trade linked to the canal. Darnestown became an important place for commerce in the area. Seneca Road led to a sandstone mill and the C&O canal at Seneca Village. From Darnestown one could travel either by stagecoach along Darnestown Road or board a packet boat on the canal at Seneca.

After the Civil War, Darnestown experienced an economic downturn due to the increased popularity of the railroad, which bypassed the area. The mill business decreased and some farmers tried their hand at tobacco farming. This proved to be unprofitable for most and many people left the area. It wasn’t until World War II that Darnestown began to grow and prosper again. This was mainly due to the government hiring more employees and the push for an improved road system. Approximately 5,000 citizens live in the Darnestown area today.